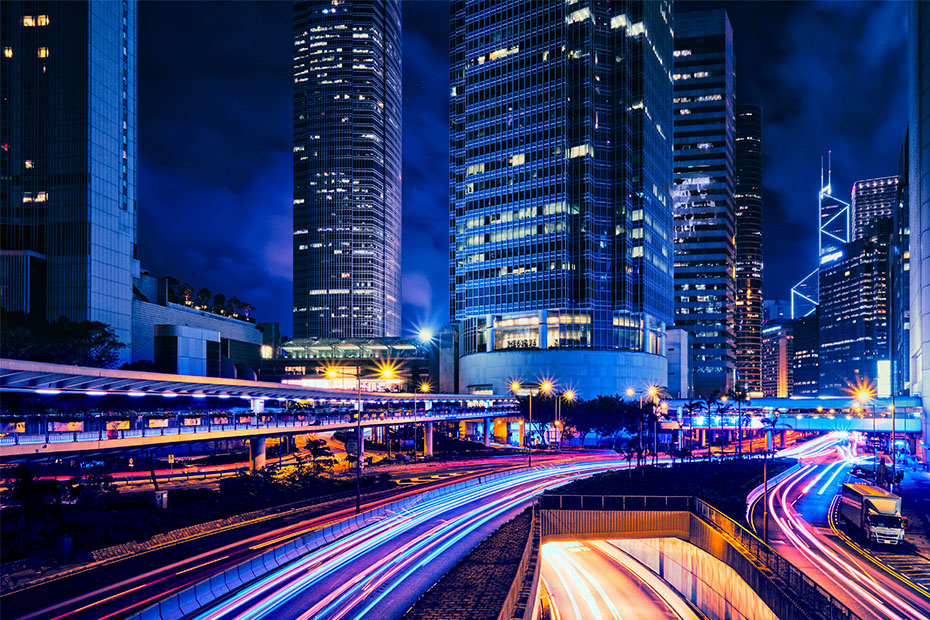 Ostfildern-Kemnat, Germany. “Smart city”: this term describes complex, multi-layered concepts for the development and digital transformation of urban spaces. The basic idea behind it is that these spaces are to be made more liveable, more efficient, more climate-friendly and therefore more sustainable by the adoption of innovative and networked information and communication technologies. The relevance of the topic is obvious, because official calculations – such as those conducted by the German Federal Institute for Population Research, for example – reveal that around two-thirds of the world’s population could be living in cities by 2050. As living spaces in general, they therefore also play an important part in addressing challenges such as climate change. Smart cities necessitate the digitalisation of a whole range of areas, among them the energy, water and mobility sectors. This requires the integration of a large number of sensitive electrical and electronic components. Adapted to the respective requirements, customised potting compounds, adhesives and sealants from WEVO-CHEMIE GmbH protect such components from challenging environmental conditions, heat generated during operation or tampering – and play their part in enabling these new technologies to be implemented.

Smart applications deployed in smart cities allow previously independent systems to interact with one another. They can exchange information in real time, communicate with each other and react to information transmitted. To this end, sensors take on a variety of functions: for example, they monitor the flow of rivers and streams to provide timely flood warnings or they ensure that municipal waste containers and private refuse bins are emptied as needed and that billing is accurate. To help control air quality, environmental sensors measure particulate matter and pollutant levels – if desired, they can also actively intervene in the flow of traffic and impose speed restrictions or temporary driving bans. At the same time, smart diverting of road users around traffic jams and to the next available parking space is possible thanks to sensors that measure traffic density and vehicle speeds. And with respect to street lighting, smart systems can actively control the illumination level depending on whether a person or a vehicle is approaching. This allows energy consumption to be optimised and reduced.

All of these sensors are sensitive components for which environmental influences such as the weather, exhaust emissions and particulate matter are a challenge. Wevo offers customised potting compounds whose hardness, weather and chemical resistance properties are adapted to ensure reliable protection. The special dielectric properties of these compounds also enable the reliable and undisturbed transmission of signals to the receiving stations and prompt evaluation of the data generated. Wevo has already developed customised solutions that facilitate digitalisation for other domains associated with smart cities – such as energy, mobility and water management.

Smart grids create the conditions for the transition to renewable energies. They form an important aspect within the framework of smart city concepts, but are also brought forward independently of them. Smart grids enable communication between power generation devices, energy transport and storage components as well as appliances. This allows energy flows to be controlled in line with the demand and the requirements of the power grid. Moreover, central management of the system ensures stability and security of supply, as well as the balancing of supply fluctuations, which are unavoidable with renewable energy sources. In addition, the trend towards decentralised energy generation and storage in municipal as well as private plants is also supported. Surplus energy from household power storage units or car batteries can ultimately be fed back into the grid by smart technologies during periods when the demand for electricity is higher.

For this purpose, energy flows in power generation plants and substations, must be measured precisely. To this end, a wide variety of smart electricity meters and instrument transformers are being developed, as well as IoT (Internet of Things) solutions for the energy supply system in general. The components in question, such as instrument transformers, current sensors and transformers, are hi-tech devices and consequently sensitive to ambient conditions. For reliable protection against temperature fluctuations, rain, snow and salt, Wevo has developed customised potting compounds based on polyurethane, epoxy resin and silicone. The materials have been adapted with respect to, for example, their composition, degree of cross-linking and glass transition temperature to meet the respective requirements. In particular, measures also needed to be taken to prevent moisture from ingressing and to provide reliable electrical insulation. For this purpose, the hydrophobic and dielectric properties as well as the thermal shock resistance of silicone- and polybutadiene-based potting compounds have been adjusted accordingly.

In the case of digital electricity meters, also known as smart meters, and current sensors, customised Wevo potting compounds offer protection against tampering in addition to protecting the sensitive electronics against moisture. In addition, safe operation is ensured by a high glow wire resistance of up to 960 °C and self-extinguishing properties compliant with UL 94 V-0. This enables reliable real-time measurement of the energy consumed and generated by, for example, photovoltaic systems. Smart meters then intelligently control energy flows on this basis – deciding whether the energy should be fed into the grid, consumed by the consumer or stored in the installed battery.

Wevo has developed thermally conductive, polyurethane- and silicone-based potting compounds and adhesives for use in the assembly of battery systems that in turn are used, for example, to store energy generated by rooftop PV systems. These products connect the individual battery cells to one another and bond them thermally to the battery casing. This allows any heat that arises to be optimally dissipated, which extends the components’ service life. What’s more, Wevo products have built-in flame protection for safe operation and to prevent “thermal runaway”, i.e. overheating, of the battery module.

Digital smart water and gas meters are also already in service. Like smart electricity meters, they offer benefits to both consumers and utilities, including digital retrieval and transmission of meter readings. To guarantee the accurate metering of consumption levels and the interference-free transmission of signals, Wevo has developed customised polyurethane- and polybutadiene-based potting compounds and adjusted their dielectric properties – for instance, in respect of permittivity and dielectric loss factor. Potting gas and water meters can also help prevent meter readings from being manipulated.

Mobility also has a major part to play in smart cities. In future, our mobility will be provided by smart, electrically powered transportation systems, such as autonomous shuttle vehicles, monorail systems and last-mile vehicles. They will bring about a significant reduction in car and truck traffic, resulting in cleaner cities and lower carbon emissions.

Wevo has many products in its portfolio that are tailored to the many electronic and electrical components crucial to the mobility sector, such as battery systems, sensors, camera, radar and lidar systems. Its potting compounds, sealants and adhesives can be adapted, for instance, to be water-repellent and to allow sensor components to freely transmit and receive radio signals. By adjusting their adhesion properties and hydrophobicity, it’s also possible to ensure good, reliable sealing as well as safe operation.

In addition to the examples mentioned, Wevo has already developed a multitude of other potting compounds, adhesives and sealants that allow innovative technologies to be deployed in smart cities. And the company is constantly researching further new options.